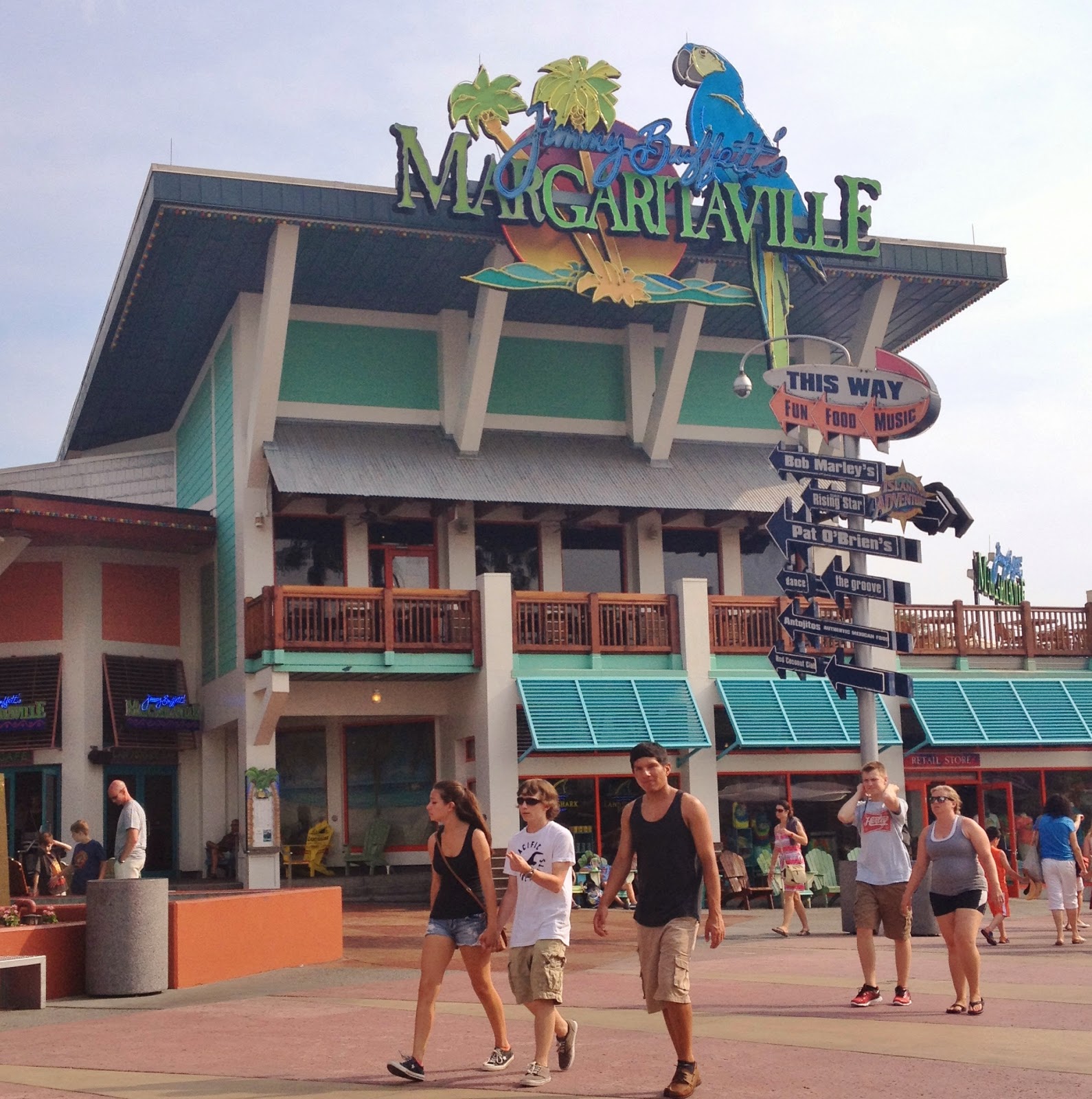 As a born and bred Floridian, I take pride in my wacky state of residence and defend it against the countless jokes and obnoxious questions people have about the sunshine state (no, most of us don’t go to Disney every day and yes, we do feel bad when the rest of the country is covered in snow). Though it may seem stereotypical, I do think at some level Jimmy Buffett’s island tunes are the soundtrack of the Floridian lifestyle. While his whole playlist doesn’t apply, it’s hard to resist his songs of summer on this Memorial Day Weekend as the city opens up to welcome summer in all her blazing glory.


What drew me to Jimmy Buffett’s Margaritaville was Orlando’s first week of truly hot weather and my curiosity about their recently revamped gluten-free menu. Wanting to beat the heat and get away from it all, my dad and I decided it was time to pay Margaritaville a visit.


Located in Universal’s CityWalk complex, Magaritaville is a popular option for those seeking a gluten-free meal while on-property at Universal Orlando. Minutes away from the two parks, CityWalk is a collection of shops, restaurants and movie theaters that provide a welcome retreat from hitting the parks and a welcome getaway for visitors and locals alike. Admission does not require a park ticket, so it’s a great option to spend a couple hours or a whole day.

I’ve known about Margaritaville’s gluten-free options for a while because I sampled from their gluten-free menu over a year ago. Though the experience has faded in my mind, I remember that the menu was limited and that it took a couple tries to get a side salad without cheese and croutons. I’ve read other Orlando blogger’s experiences, such as Jen’s from Celiac and Orlando, and knew that the restaurant’s menu has been in flux for a while now but in doing research, found that the update menu has been fully implemented. Upon my arrival I requested the gluten-free menu when checking in and found that they had them stacked next to the regular menus ready for any gluten-free diner coming through the door.

Once seated, I informed our waiter that I was both gluten and dairy free and he decided to send a chef out to talk to me so that I could ask about my options and rest assured that the order wouldn’t get lost in translation. I really appreciate that he took this step because it gave me confidence that I could make sure my meal was safe.


After perusing the menu, the revised offerings were greater in number, but at the same time nothing special. Like many chain restaurant’s gluten free offerings, they have steak, seafood, and chicken in various different preparations such as sandwiches, entrees, and salads. Buffett fans should rest easy knowing they can get a gluten and dairy free Cheeseburger in Paradise. Dessert, too, is offered on the gluten-free menu, but it is not dairy free. I was intrigued by the more unique offerings such as the volcano nachos, taco salad, or “drunken” shrimp, all of which can be made gluten and dairy free, but shied away from the volcano nachos after seeing their enormous size as waiters carried them to fellow diner’s tables. When the chef came out (I failed to catch his name) a short time later, I inquired as to the feasibility of the “drunken” shrimp because it seemed to be lighter than the others on such a hot day. He said the dish was still possible, but that I’d have to forgo the tequilla-lime butter it’s traditionally prepared with in favor for just seasonings and oil. Not minding this change, I committed to it. Knowing it was an appetizer portion (which was meant to be shared), I figured the shrimp would make a good entree with an additional side item such as a side salad or green beans. However, after asking about my options, he quickly dismissed the green beans because they are pre-marinated in butter beforehand and didn’t really offer a veggie alternative except for fries (they do have a dedicated fryer). Not wanting to be too picky, I decided to just go with the shrimp and see how much it filled me up. 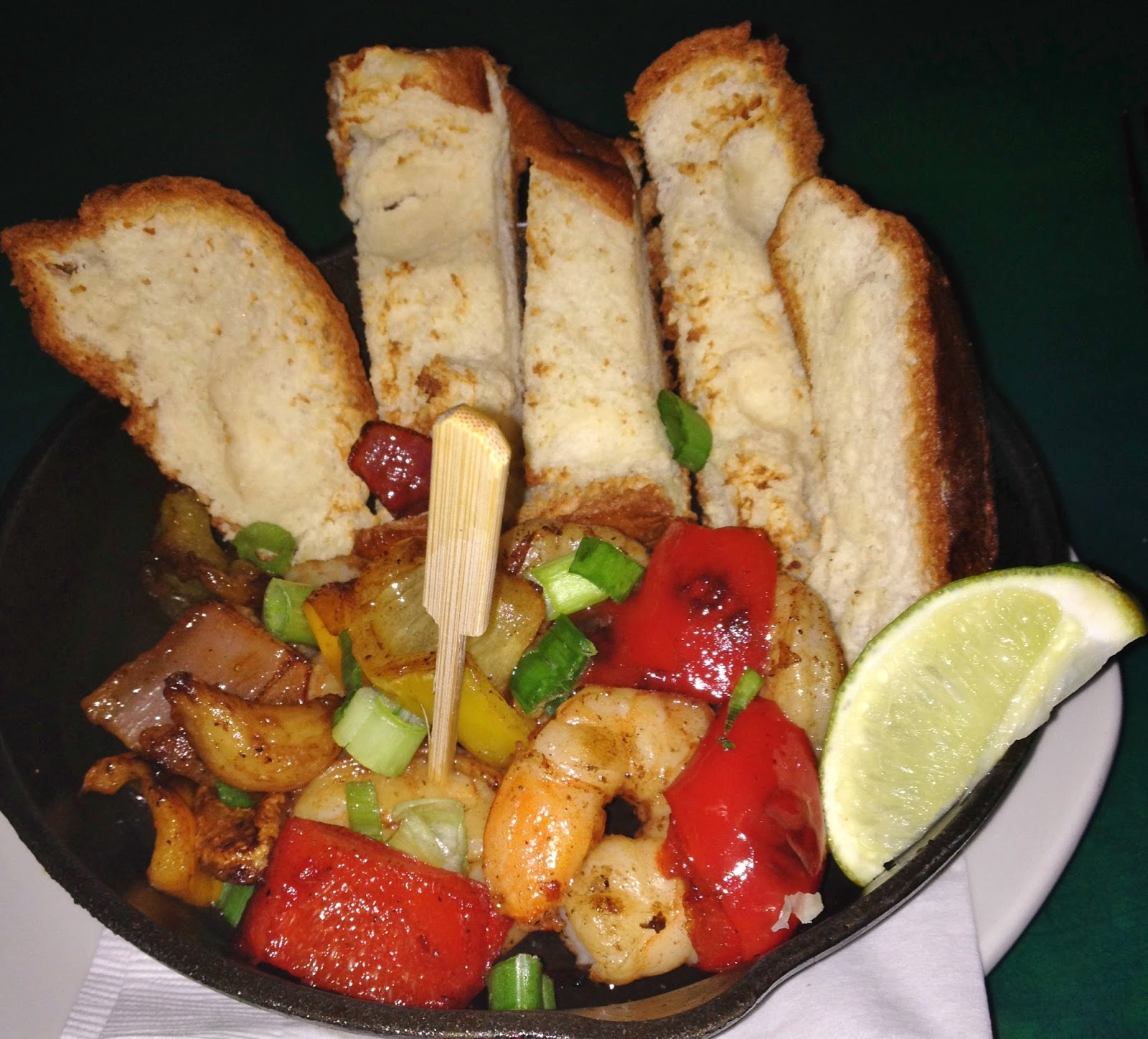 When the shrimp came to the table, my first reaction was: “is that all?” The muti-person appetizer I thought I was getting turned out to be a pint-sized portion of shrimp, veggies, and grilled bread. By the numbers, my dish had five shrimp and a halved Udi’s bun with a handful of sauteed veggies to bring color and flavor. After sampling it, my incredulity melted a little thanks to the dishes spicy, pan-seared flavor. The veggies were distinctly fresh and the shrimp was cooked perfectly. I especially loved dipping the bread pieces into the seasoned liquid left by the shrimp and veggies because it gave the bread a real kick. But all too soon, the food was gone and I was not quite satisfied. While I did thoroughly enjoy the food I had, it did not stand up at all in my mind against the price paid for it and my expectations. Then again, overpriced food is nothing new for gluten-free diners. It’s just disappointing to have to constantly get shortchanged because our diet necessitates a couple different ingredients and more strict food prep protocols.


All in all, Margaritaville really is a great place to go to get away from it all. Tourists and locals alike will find something to love about this fun restaurant from the laid back attitudes to the massive volcano that spits out margarita mix into a giant blender. It’s a favorite of my family’s over the years as a place to take out-of-town guests and to take a break from hitting Universal’s parks. What matters is that it is a reliable resource for gluten-free diners on-property at Universal, which does not have as extensive special diet accommodations as other parks.


Side note: I really want to thank the kind restaurant worker who offered to bring water over for Locke while he was camped out under the table. Given the heat and stress of being in a busy environment, this gesture was greatly appreciated by both of us!