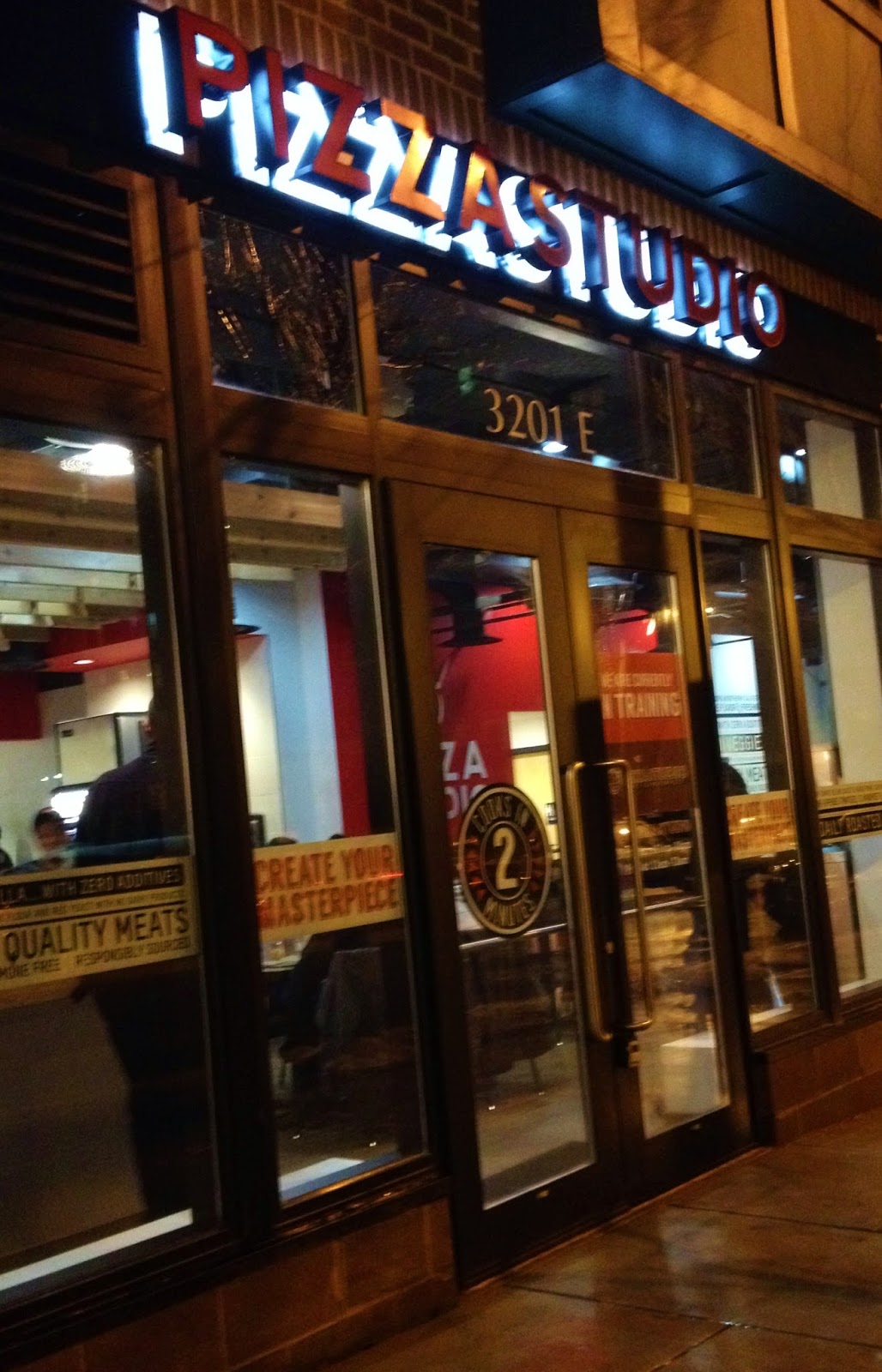 Us gluten-free folks have all too often become accustomed to super expensive, sub-par pizza options when dining out. Usually these cardboard-like imitations of the pizza pies we once enjoyed without worry are watery, gummy, undercooked, and/or too flimsy to support toppings of any substance. Throw in a dairy intolerance, and your options are even more limited as pesto, cheeses, and other pizza toppings are dangerous landmines of potential cross contamination.


Always on the lookout for a great gluten-free pizza, I have eaten around Orlando and Baltimore and have found that gluten-free pizzas are a hit-or-miss gamble. While I’ve found neighborhood joints that I feel comfortable with, as a busy college student, I default most often to homemade pizza because I can completely control the making of it.


Not giving up on the prospect of a budget-friendly, downright delicious pizza, I was super excited to get an invitation to check out Pizza Studio, a new pizza joint opening in Baltimore’s Charles Village on March 6th. Despite the threatening snow, sleet, and rain, I braved the trek south, near Johns Hopkins, lured by the prospect of complementary pizza and getting a firsthand look at the protocol and processes behind their gluten-free pizza.

When I first arrived, I was greeted warmly, and soon learned that getting a gluten-free pizza would not be an option since they were still in training mode. Disappointed, but understanding, I shrugged it off, and agreed to come in at a later date to get my first taste. However, quick thinking by the staff, soon saved the night as they broke out a gluten-free crust especially for me. A red flag was raised in the dairy department, but the offending ingredient was egg whites, which are not considered to be dairy according to allergen standards. I clarified that animal milk based products are what I cannot have, so once again my meal was green lighted.


As I turned to the pizza assembly line, I took in the basics of ordering. All gluten-filled pizzas are $7.99 and all gluten-free pizzas are $9.99. There are no extra charges for toppings, meats, or specialty pizzas. It’s one flat flat rate for a 11″ pizza with your choice of sauces and cheese with an unlimited number of veggies, meats, roasted veggies, and spices. I’m not kidding. It’s that simple. 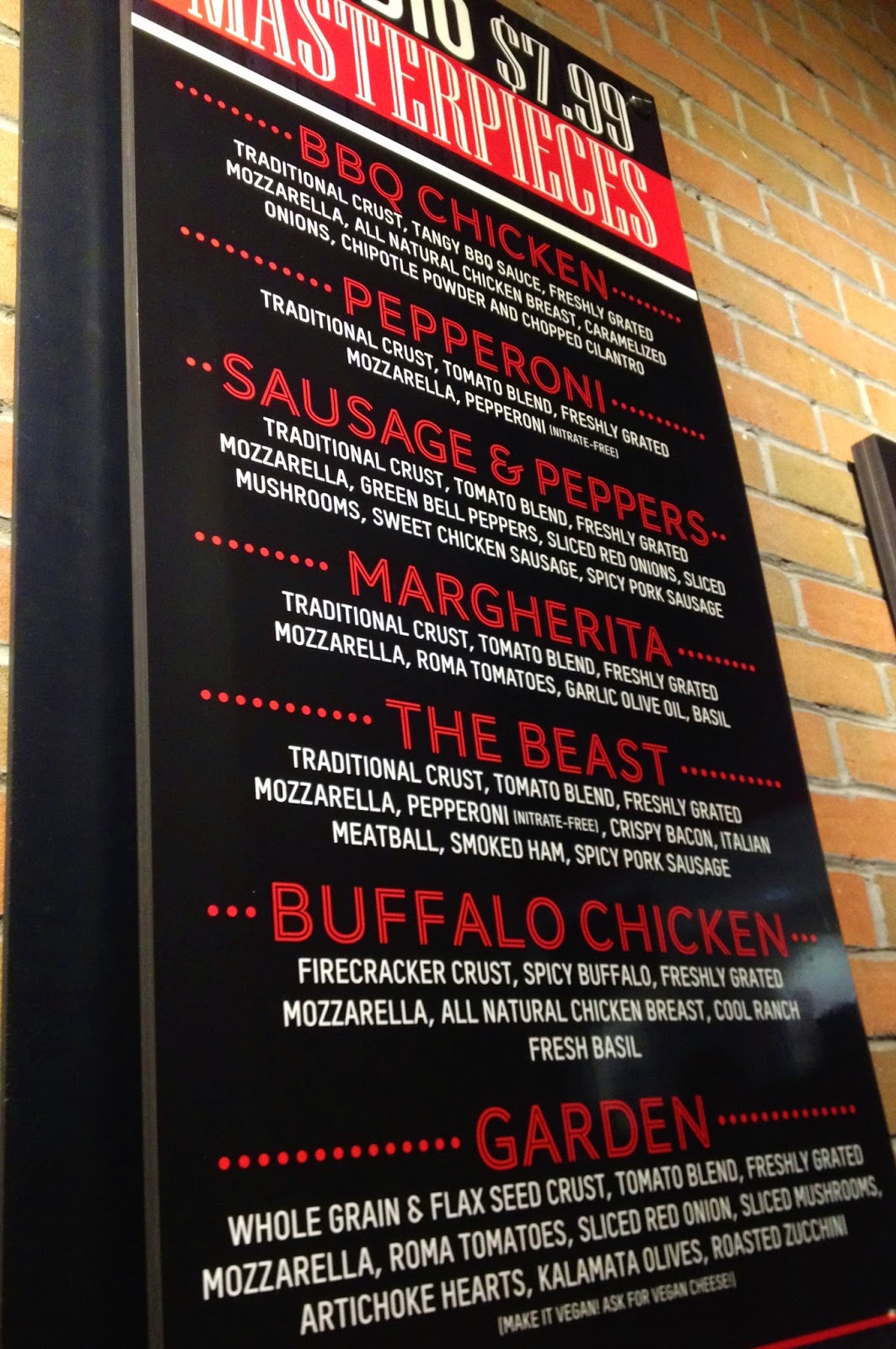 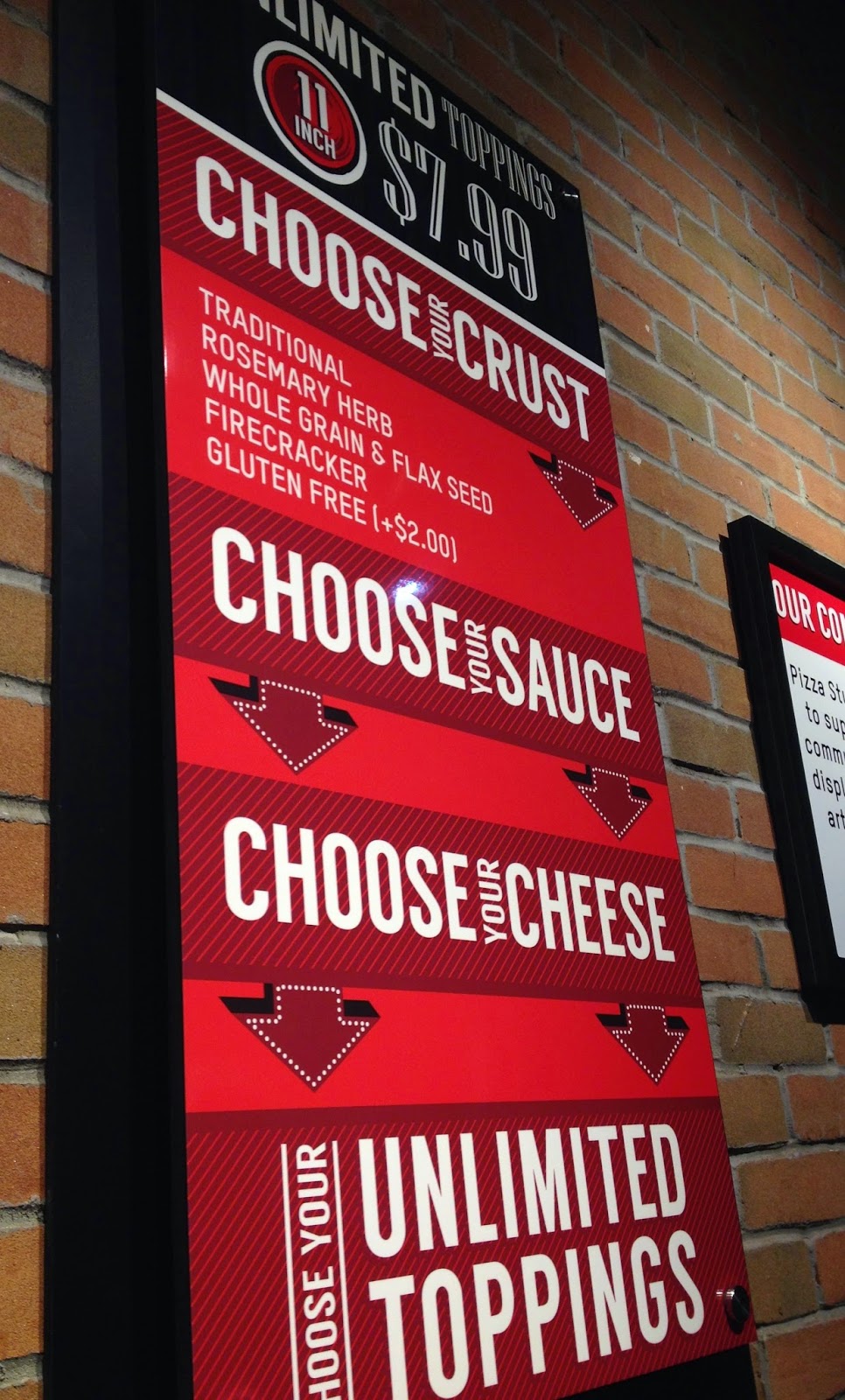 As I stepped up to order, I let the pizza artists know that I was the gluten-free diner, and the whole team who would take care of me- four to six people in total- without me asking, disposed of their gloves, washed their hands, and put on fresh gloves. My pizza crust was unwrapped and put on a baking dish under parchment paper. They then proceeded to ask me if my dietary restriction was an allergy (to which I replied yes), and they brought out entirely new utensils to dole out sauce.


My one caveat here, is that the sauce pool is shared among the gluten and gluten-free pizzas. While the separate scoop was a good preventative measure, I can’t help but think that the dipping and spreading of the ladle will lead to cross contamination. Maybe they could have a separate sauce bin strictly for gluten-free use in the future.


Though I did not partake in the cheese department, I was informed they have a vegan cheese that is gluten-free, dairy-free, and soy-free. It’s Daiya mozzarella shreds, for those of you with dairy issues or wanting to keep vegan. I’m just not a fan of any non-dairy cheese, so I’ll just provide this info for your benefit. 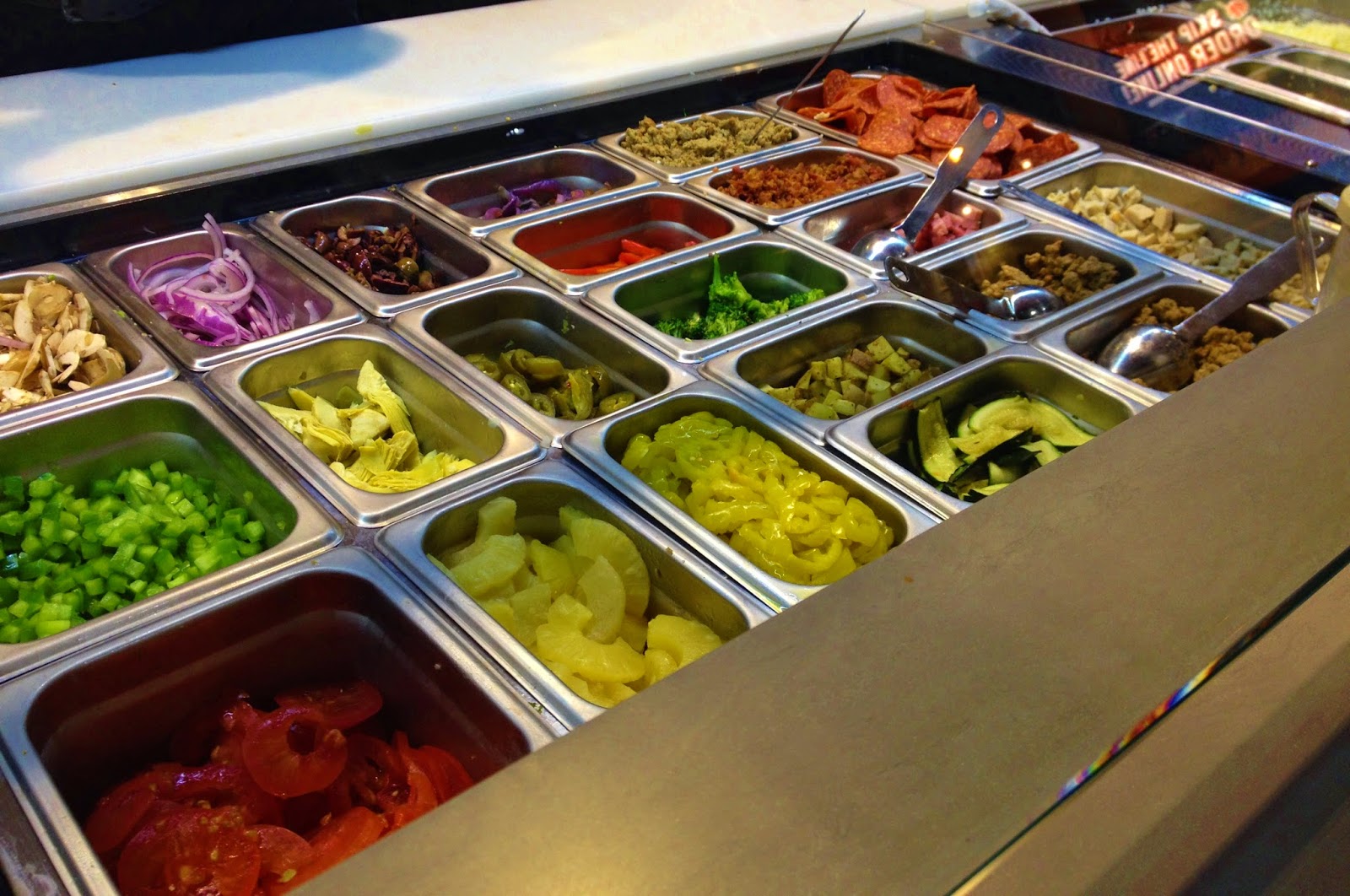 With my pizza situated with sauce, it proceeded down the line to the toppings department. When Pizza Studio says toppings are unlimited, they mean it. I loaded my personal pizza with tomatoes, green pepper, mushrooms, artichokes, broccoli, chicken (that the staff confirmed was safe) and topped it off with a sprinkling of Old Bay seasoning. Though I technically am a Floridian, this pretty much confirms the level of Maryland-ness in my blood!


From here, my pizza went to the conveyor-style oven where it cooked in two minutes. Literally. By the time I found a table, the pizza artists were on their way to deliver it. I confirmed that separate utensils were used to cut it, snapped a picture, and then let loose and grabbed my first slice to sample. The crust is thin, but not overly so. It support the weight of the many toppings my first bite brought a flavor explosion as the rich tomato sauce mingled with the vegetables, and spice of the Old Bay. The crust was a pleasant surprise as it was crisp and crunchy on the bottom, as if baked in a brick oven for several minutes, while the  inside was chewy. The complementing textures caught me off guard as I couldn’t believe my tastebuds that this was indeed gluten-free. The vegetables were noticeably fresh, and the chicken was nicely seasoned and tender. It was darn good, and made even better by the weather-dampened day I had. Kudos to Pizza Studio for nailing it on the gluten-free front, and not price gouging restricted diet customers by charging double that of “normal” customers. I will happily and willingly pay $9.99 for a pizza when I know that the management cares about keeping me safe. Note that gluten-containing ingredients are handled in the premesis so there is no 100% claim of gluten-free-ness. Use your judgement to weigh your comfort level. 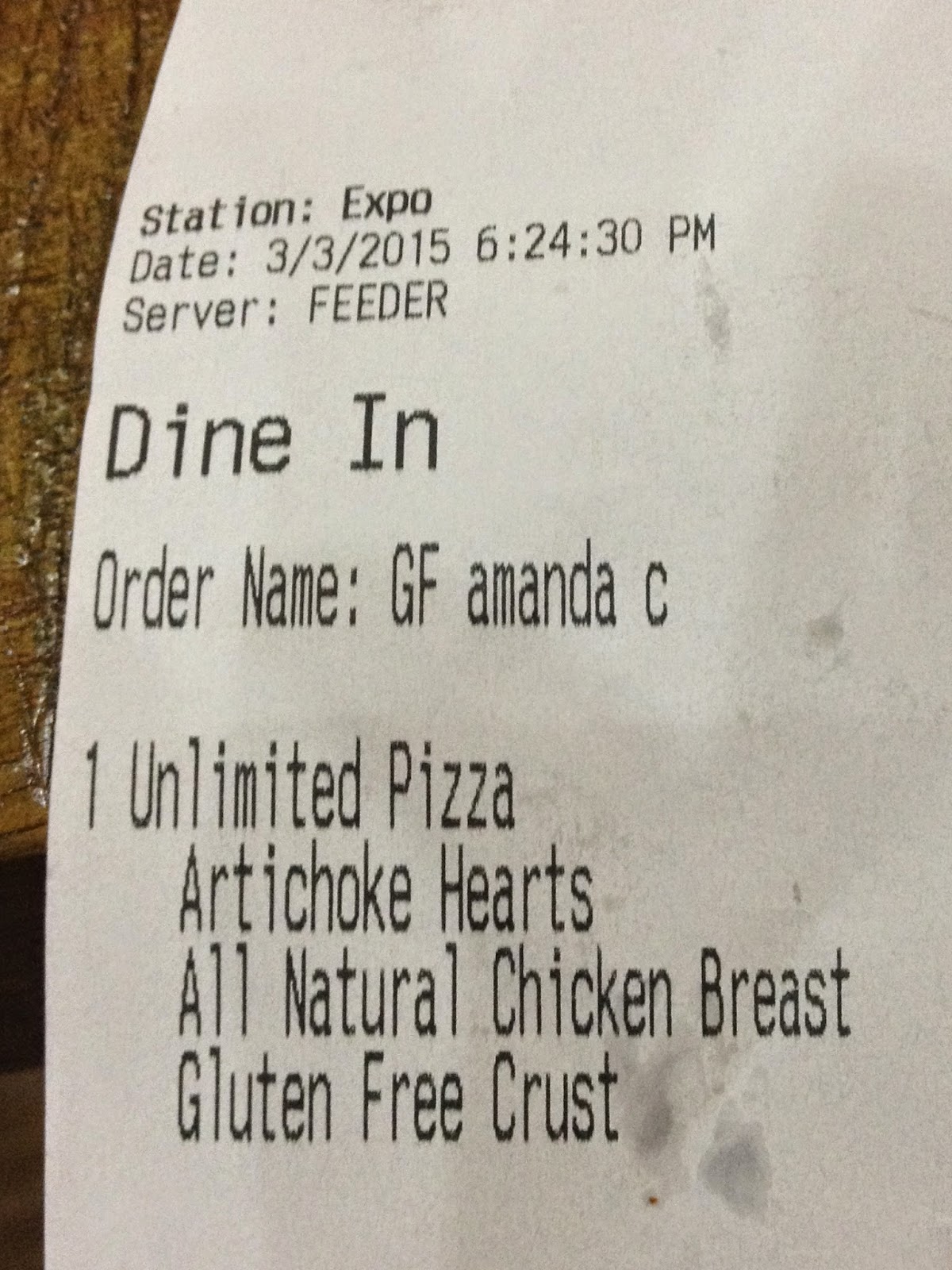 If you can’t tell by now, Pizza Studio totally knocked my socks off. They nailed it in every way, and immediately put me at ease, then won me over with a budget-friendly pizza that is both fresh and flavorful. I especially enjoyed meeting the staff who went out of their way to be friendly and accommodating, and one of the owners, who “got” my gluten-free concerns given that he has a family member who is gluten-free as well. I extend to them a big Baltimore welcome, and hope that they quickly expand to my neck of the woods in Towson, and beyond. Now that I think about it, Central Florida, too, would be a great home to a Pizza Studio expansion. Until then, I will definitely try my best to be a regular customer to their Charles Village location!


BONUS: Visit Pizza Studio Baltimore on Thursday, March 5, 2015 for FREE pizza all day! The following day, Friday the 6th, is the Grand Opening, and the FREE pizza day will be scheduled then as well due to Thursday’s winter storm. Prizes will be given out, and fun is to be had by all! Check it out if you’re in the area.

Disclaimer: This review is based upon the information I have at the time of the review and does not reflect changes in ingredients or availability of items. Please contact the restaurant directly for up-to-date information and feel free to contact me with any questions or comments. I was invited to a media preview event by Linda Roth Associates, Inc. and provided a complementary sample of Pizza Studio’s pizza, but this review is a reflection of my own, personal opinion.